We recommend some wonderful itineraries to discover the charm of Abruzzo. 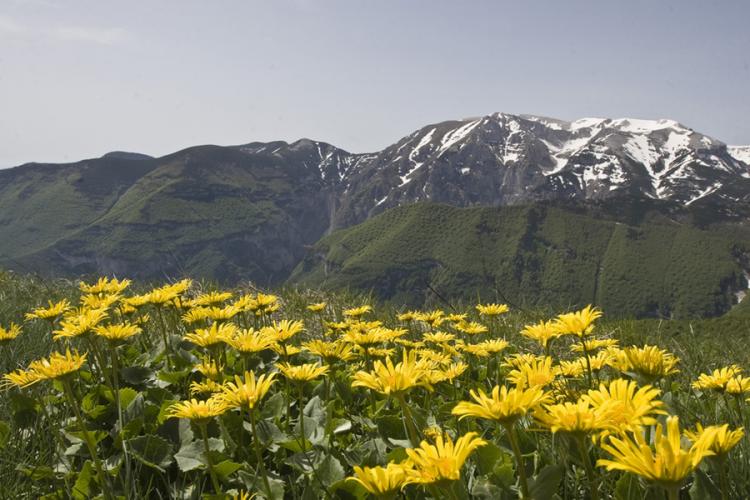 Among the enchanting villages and views of the Majella 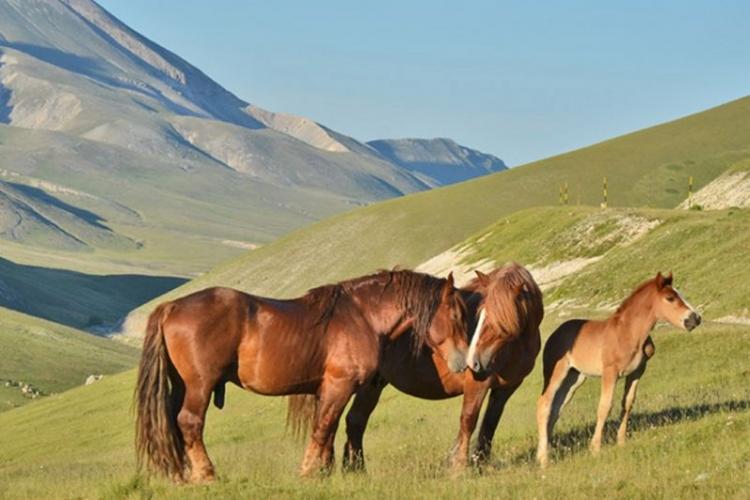 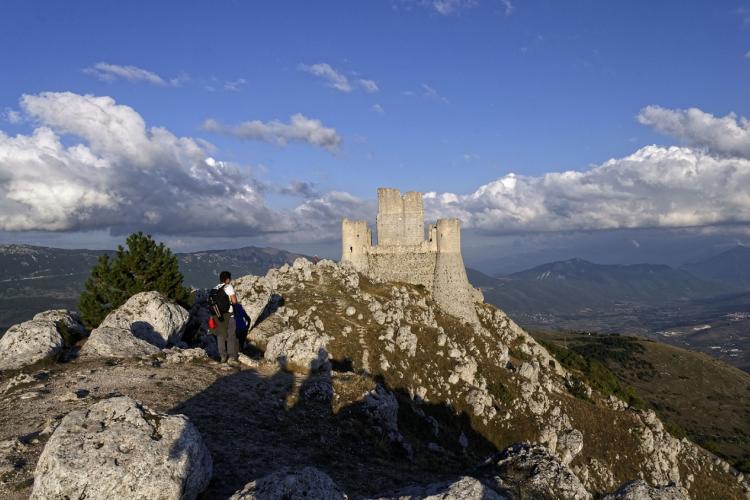 Among medieval villages and castles

Those who come on holiday to Abruzzo can not help but cross the famous "Wine Roads", routes that lead to the discovery of the territories while allowing you to taste some of their most prized labels. Among the most famous stops are Colonnella, Controguerra, Corropoli, Torano Nuovo and Ancarano.
In Colonnella, whose historic centre boasts a long and characteristic staircase built at the beginning of the 20th century, the 'must' stops for lovers of good wine are at the Cantina Sociale and Cantina Lepore.
Proceeding to the west wide, we enter the hills until we reach Controguerra, the production centre of the DOC of the same name and home to the Montori, Monti and Dino Illuminati wineries. The town is dominated by the ancient tower built in 1279.
Turning south, you reach the ancient settlement of Corropoli, a town built on a Neolithic settlement, known mainly for the Palio delle Botti, a medieval re-enactment that testifies to the link between the city and wine production. Among the wineries that you can visit in this stage there are the Marcocelli Farm and Valori Winery.
The next stop on our route is Torano Nuovo, also a settlement of ancient origins. Here stands the Church of S. Massimo in Varano, one of the oldest in the region. Among the most famous wineries we find the Azienda Agricola Barone Cornacchia, with its Controguerra Rosso Doc.
From here we continue to Ancarano, a town that dominates the entire valley of the Tronto Here rise the estates of the Ferliga Wineries, where the Controguerra Merlot Doc is produced. 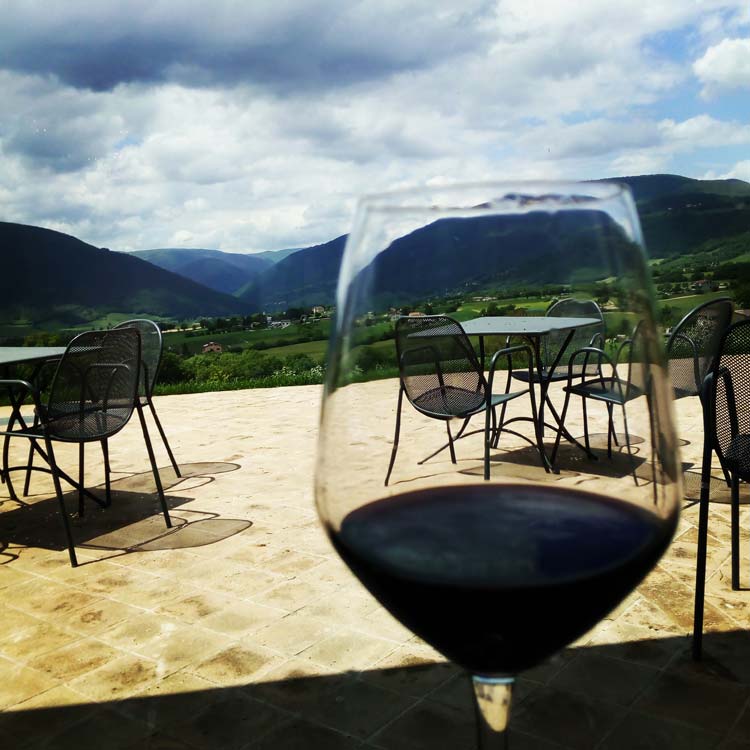 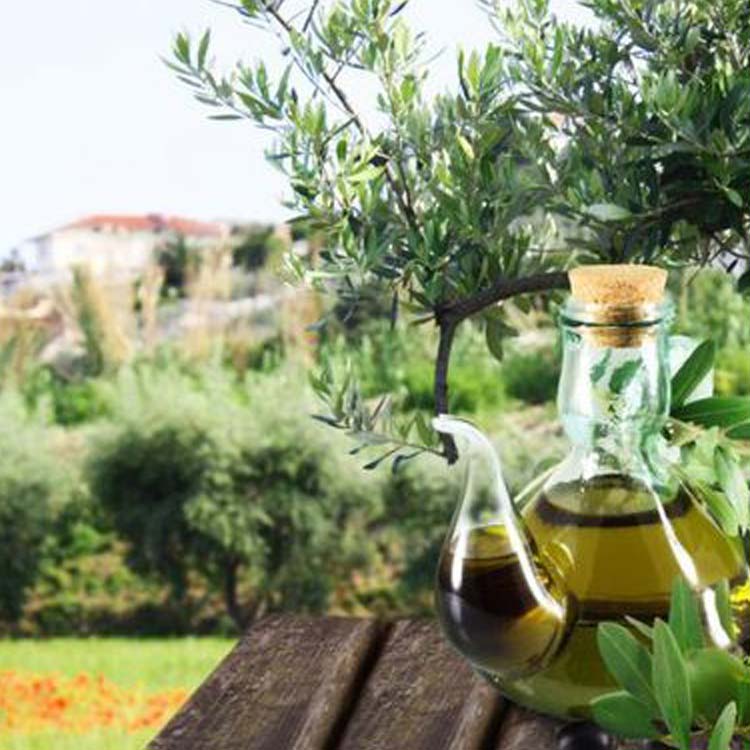 Roads of the Oil

The olive tree was introduced in Abruzzo in the fifth century (BC) and its cultivation, as well as the production of oil, were later developed by the Romans. Exposed to the wind and humidity, especially in the hills of Teramo, the Abruzzo region is a changing territory. It has a mild but warm climate, one of the most favorable to this production, because it is located perpendicular to the Adriatic Sea and the Gran Sasso massif.
By virtue of the quality of the olives produced and the oil that they help the farmers to obtain, mostly extracted in the traditional way from small mills, Abruzzo has obtained the assignment of three D.O.P.:
APRUTINO PESCARESE a white wine produced in the territory of the province of Pescara, with a yellow-green colour and a medium zesty flavour;
COLLINE TEATINE in the province of Chieti, from the color between green and yellow and fruity flavor;
PRETUZIANO DELLE COLLINE TERAMANE in the Teramo area, greenish and yellow in colour and with a medium zesty flavour with a bitter and spicy flair.

Sulmona is located on a plateau, at an altitude of about 350m, in the southernmost part of the wide Conca Peligna, in the centre of the region of Abruzzo. It has the characteristics of a quiet town that allows the development of a healthy life, given the easy accessibility of the many areas used as a park, and green areas that surround it. It is the seat of a court and of an episcopal diocese.
Very famous and very ancient, is the art of working with confetti, the first recipes date back to the fifteenth century, but the history of confectionery would have even more distant roots, from the time of the Roman conquests. But, sweets aside, what else will you find in the city of Ovid?

Municipal Gardens
Arriving in Sulmona from the highway road, the Municipal Gardens will be the first thing you will see when you enter the city, necessarily passing through Piazza dei Caduti. At the opposite pole is the Duomo, in the midst of historic buildings and quiet tree-lined avenues that are well suited to the quiet rhythms of this beautiful village.

Complex SS. Annunziata
It is the most representative building of Sulmona, a church of the medieval period rebuilt several times because of earthquakes, and the building next door, from 1400, which now houses the Civic Museum. The whole complex is elegant and harmonious despite the overlapping of genres and styles, from Baroque to Gothic to Renaissance. It is located in Piazza dell'Annunziata, a pleasant green open space with benches, a few rooms and a beautiful fountain.

Medieval Aqueduct
This aqueduct from the thirteenth century includes Piazza Garibaldi where the local market takes place regularly. It almost acts as a bridge between the Church of Santa Chiara and that of San Francesco della Scarpa, opposite, with its symbolic carved portal and the spectacular bell tower that gives it a modern appearance.

Church of Santa Maria della Tomba
This Romanesque church is located in Piazza del Plebiscito (adjacent to the first restaurant we mentioned earlier). It was built on the ruins of an ancient temple dedicated to Jupiter. It is the third most important church in Sulmona, after the Complex of the SS. Annunziata and the Duomo. 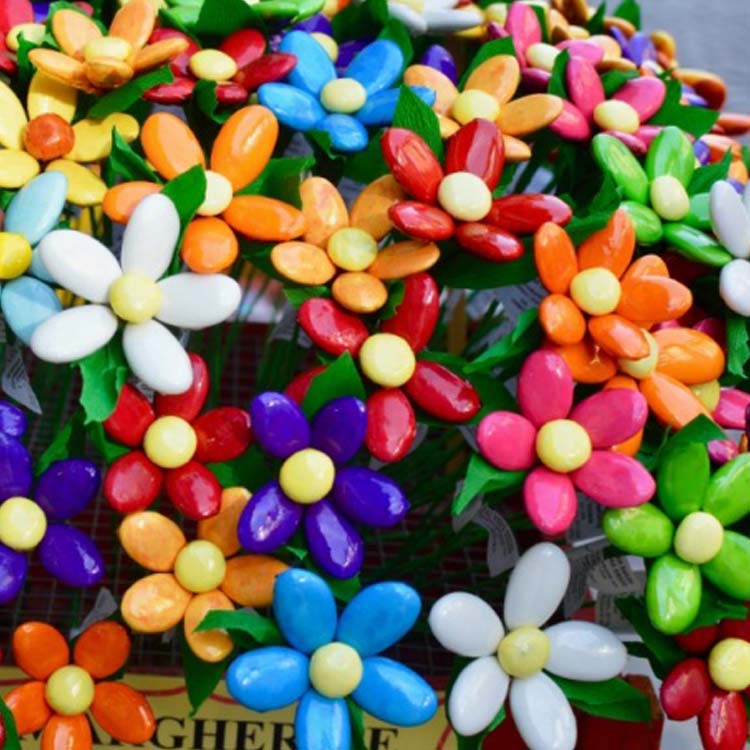 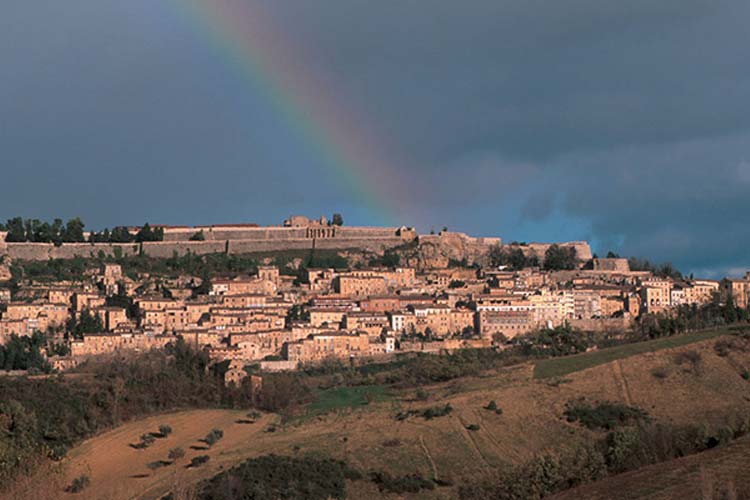 The fortress of Civitella del Tronto is one of the most impressive military engineering works in Italy: it extends for more than five hundred meters in length on a rocky ridge. All its bright history is linked to the strategic position it had, for some centuries, as a stronghold of defense of the northern borders of the various Neapolitan realms. The fortress and the connected village suffered more sieges, but what has gone down in history is the unfortunate defence against the Sardinian Piedmontese army in 1860/61, which ended with the surrender on 20 March 1861, the last Bourbon stronghold to bend to the nascent unity of Italy. 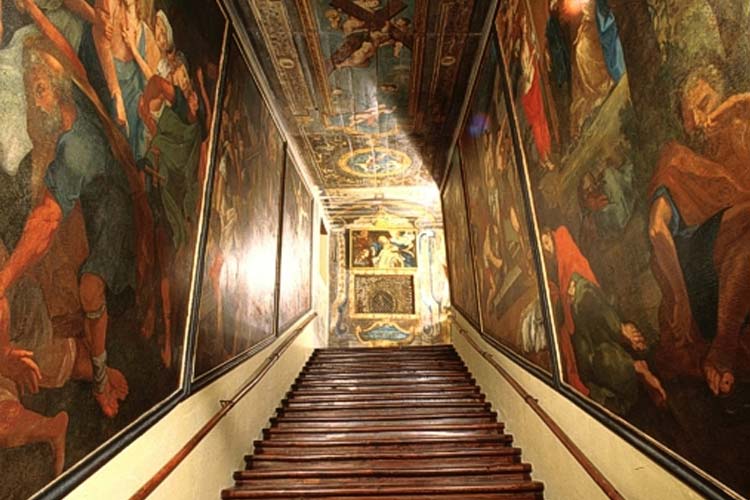 Campli is situated on a hill between the valleys of the Fiumicino and Siccagno streams. Rich in architectural monuments that make it a real city of art, Campli is home to a section of the National Archaeological Museum that houses the remains of the Necropolis of Campovalano. A beautiful example of medieval architecture is the Parliamentary Palace that later became Farnese, located in front of the Cathedral of S. Maria in Platea of 1300, which has a Romanesque bell tower. Also a famous historical spot to visit, is the Scala Santa (Holy Staircase), so called because, after 1776, the custom of granting indulgence to those who walked along it on their knees spread. 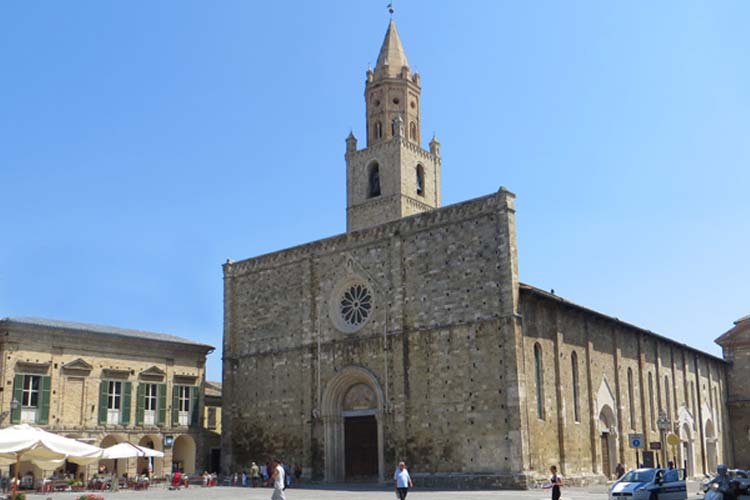 The ancient city of Hatria, built between the seventh and sixth centuries BC, seems to have given its name to the Adriatic Sea and the birthplace of the family of Emperor Hadrian. Protagonist of important historical events, the city is rich in numerous monuments with particular architectural features that make this city an important tourist destination: not to be missed are the Piazza Duomo, the Cathedral of Santa Maria Assunta, the ducal palace and many other monuments of considerable historical and artistic importance. Atri is also famous for its ancient fountains, caves and gullies, true architectures of nature. 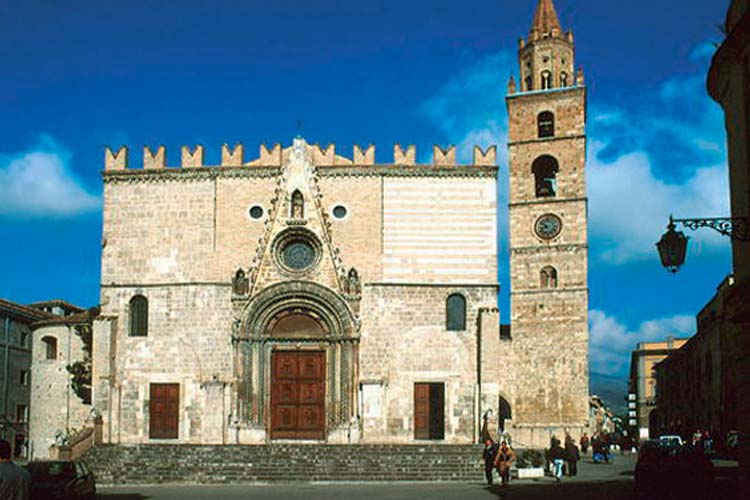 The city of Teramo has ancient origins, it was the capital of Praetotium, name given to the surrounding territory under Roman rule. Under the rule of the Emperors Augustus and Hadrian lived a golden period of which were witnessed by the baths, the theater, the amphitheater and other monuments submerged by the new city. During the 1400s it was torn apart by the fights between the Melatini, Antonelli, Spennati and Mazzaclocchi families. It then passed under Francesco Sforza and Alfonso d'Aragona. In 1798 it passed to the French until 1815 when it returned to the Spanish and then followed the history and fortunes of the south.

Every year more than two million believers come to this sanctuary at the foot of the Gran Sasso and dedicated to San Gabriele dell'Addolorata. St. Gabriel's fame exploded in 1892 when his mortal remains were exhumed and the first sensational wonders happened on his tomb. In 1920 he was proclaimed a saint, and in 1959 Pope John XXIII declared him patron saint of Abruzzo. 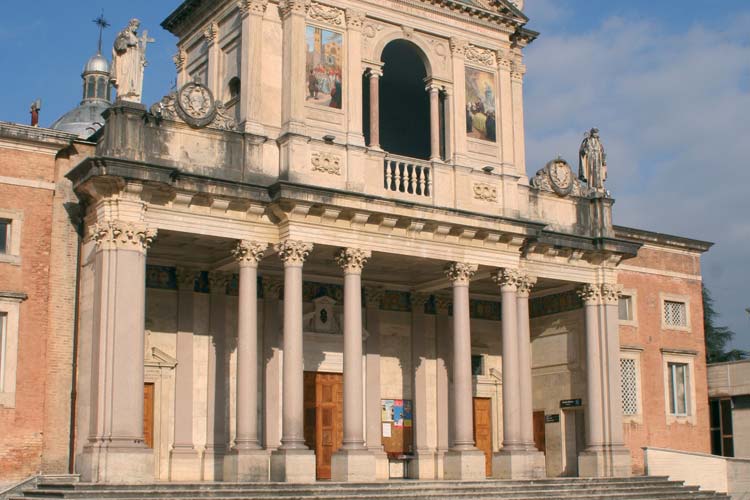 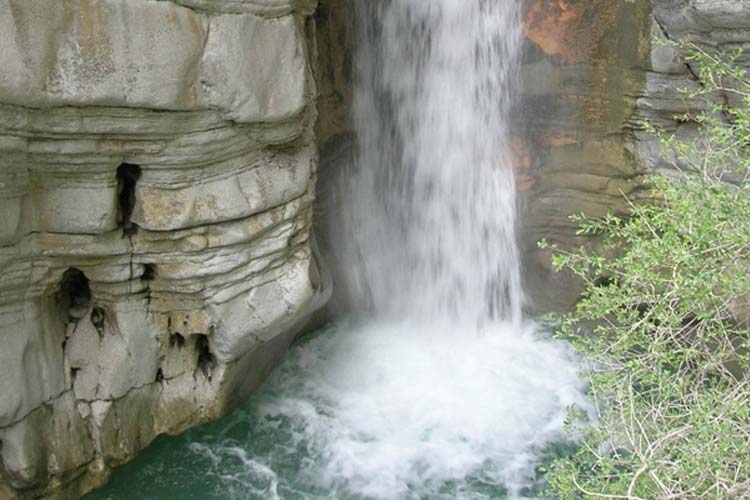 A short distance from Civitella del Tronto, you can make excursions in the Gole (gorges) of Salinello. A natural environment that combines history, culture and nature between the two sides of the Monti Gemelli: Montagna di Campli and Montagna dei Fiori. The creator of this natural monument was the Salinello stream which, acting on the entire mountain, has created over millions of years, a "gorge" some kilometers long, about 200 meters high and varying in width from no more than five meters to tens of meters, resulting in waterfalls, caves and cavities. 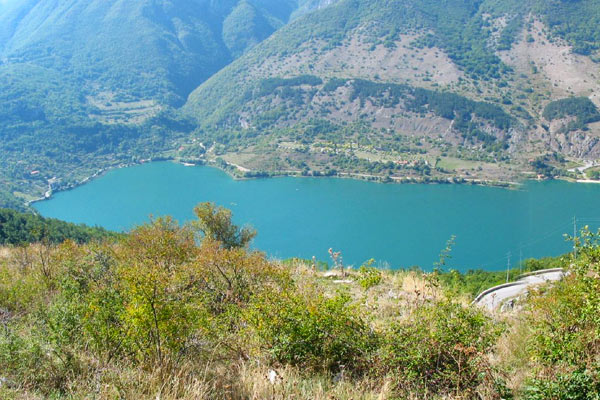 Lake Scanno is located in Abruzzo, in the municipalities of Scanno and Villalago, in the lower province of L'Aquila, between the Monti Marsicani, in the upper valley of the river Sagittario, originated by an ancient landslide detached from the above Mount Genzana, between 12,820 and 3,000 years ago, which blocked the river Tasso. 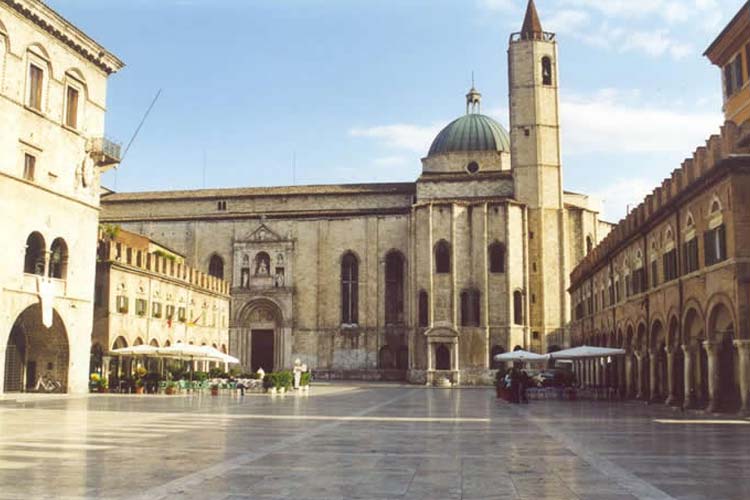 It is a beautiful medieval city, considered among the most monumental in Italy. Dotted with towers and bell towers and wrapped in the warm golden color of travertine, which covers almost the entire historic center. 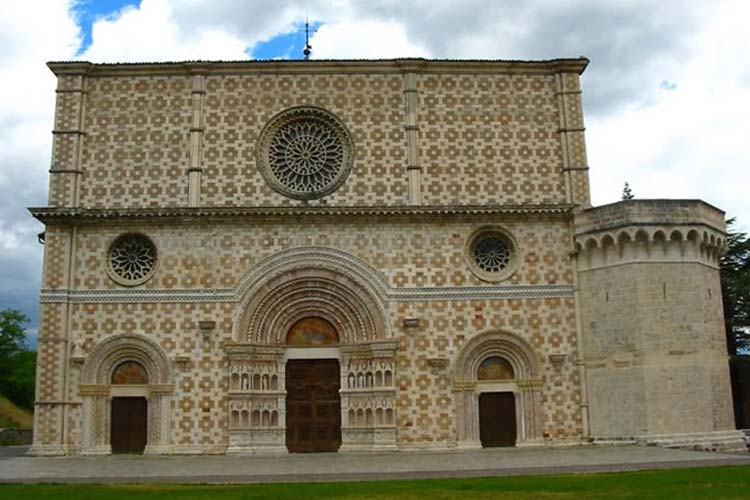 L'Aquila is an Italian town of 69,393 inhabitants, the capital of the province of the same name and of the Abruzzo region. The nuclei of Amiternum and Forcona, the main urban centers formerly present in the area of today's L'Aquila, have Sabine-West origins, being near the border of the territories occupied by the two Italian peoples. After the fall of the Western Roman Empire, in the basin of L'Aquila were formed several small urban agglomerations, called castles, which according to legend were federated for the founding of the new city in 1254. Under the Habsburg dominion of the 16th-17th centuries, it experienced a period of fluctuating economic growth which, however, was abruptly interrupted by the earthquake of 1703, which for many years would bring back.